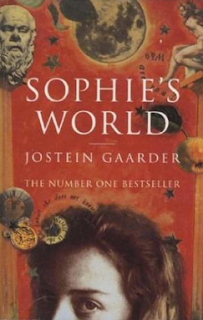 I think I first bought and read Jostein Gaarder's bestselling book about philosophy for young people, Sophie's World, when it was first published in English (translated from the original Norwegian) back in the early 1990s. I revisited it for the Convent Book Group's Philosophy theme this month.

I did recall some elements of the book, but not the central twist (though I saw that coming). And alas, I had forgotten most of the actual philosophy information which was the whole point of the novel. I have to admit that this time around, I found those sections fairly hard-going -- talk about info-dump! But when the actual mystery/twist part of the book ramps up, I found myself more engaged, and the interplay between the philosophical debates and Sophie's personal situation is cleverly plotted.

I'd be interested to know if any young people actually read this book these days. It's a useful primer on the history of (Western) philosophy and much more fun than the textbooks I had to plough through at uni doing Philosophy 101 -- though that's not setting the bar very high!