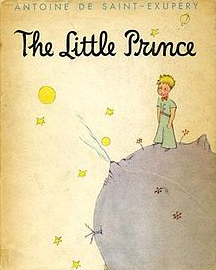 Antoine de Saint-Exupery's The Little Prince is one of those classic children's books that is probably more popular with adults. Its romantic allure is enhanced by the fact that the author, a fighter pilot, was killed in action during WWII, not long after writing it. Saint-Exupery was primarily an essayist and writer for adults, but The Little Prince has proved to be his enduring legacy, with an animated series and countless translations. We are reading it for the Convent Book Group, under the theme of Philosophy.

Can I make a confession? Not really a fan. I won a copy, picked up cheap at a library book sale, because it is a classic and I felt I ought to have it. But it just doesn't do it for me. Twee. Sentimental. Vaguely misogynist. I find the illustrations just badly drawn rather than naively charming. Him and his devotion to his bloody rose and his volcanoes and his boababs. It's all a bit try-hard for me. It comes across as a book written to order, by a publisher who said, hey, Antoine, why don't you write something for kids, mate? Something whimsical yet profound? Which is exactly how it happened.

Not for me, thanks.