Minnow on the Say 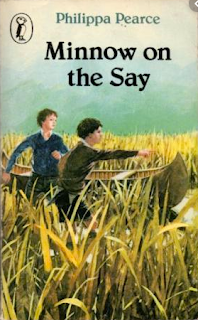 Philippa Pearce wrote one of my favourite books of all time, a book that had a huge impact on my imagination, Tom's Midnight Garden. I was aware that she'd also written Minnow on the Say, though I'd never read it; what I didn't realise was that Minnow was her first novel for children, published in 1955. When I found this copy in Brown & Bunting, I snatched it up.

Minnow on the Say is a lovely, very enjoyable, old-fashioned children's story, but it lacks the transformative brilliance of Tom's Midnight Garden. The Minnow of the title is a canoe, and the Say is a river, and the two boys on the cover, Adam and David, are searching for a lost treasure that is the only thing that will save the home of the canoe's owner, Adam. There is an enigmatic rhyme to guide them, penned by a mysterious ancestor, and Adam's grandfather's failing memory.

Adam's grandfather, old Mr Codling, is a poignant figure. Suffering from what we would now call dementia, he's trapped in a melancholy past, looking forward only to his son's return from the war. But his son is dead, and Mr Codling doesn't even recognise Adam, his grandson. The moment that stays with me, and reminds me most of Tom's Midnight Garden, is when old Mr Codling sees Adam in the moonlight and is joyfully sure that his son has at last returned home.

The treasure hunt itself is painfully slow and I doubt that a young modern reader would persist with the story. The Edward Ardizzone illustrations add greatly to the charm of the book -- when I think about it, I realise that Ardizzone illustrated so many of my childhood favourites (I'm thinking particularly of Nicholas Stuart Gray's creepy and moving Down in the Cellar). Why don't kids books have illustrations any more? (Answer: because it costs too much, I suppose. What a shame.)