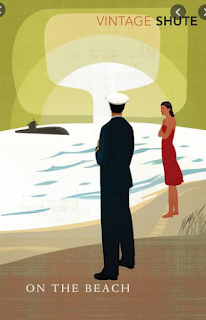 My elder daughter has been going through a dystopian phase lately (hey, she's doing VCE, what can you expect?). She asked me to buy her Cormac McCarthy's The Road and Nevil Shute's On The Beach, neither of which I had read myself. She devoured both of them at record speed. I haven't dared to open The Road, but I thought I'd give On The Beach a whirl.

It really is a surreal book. Famously, the novel follows the last few months in the lives of a handful of characters stranded in Melbourne, at the bottom of the world, as nuclear fallout from a catastrophic international war drifts southward. At the beginning of September or the end of August, everyone will get radiation sickness, and everyone will die. It's literally the end of the world.

What struck me most was how calm everyone was about it. Life goes on pretty much as usual. Oh, there's some drunkenness, some fast car racing, but people still plant their gardens, fret over their baby's teething, do their jobs, pay for their purchases in shops. Frankly, I would have expected a LOT more lawlessness, with no consequences to come.

Also, the tone is one of emotional restraint. Some characters are in denial, in one breath acknowledging that everything is coming to an end in a matter of weeks, and at the same time 'believing' that their family in the war zone is carrying on life as usual. Paradoxically, this is much more effective and horrifying than melodrama would have been, even if it is quite implausible.

It's weird and old-fashioned and unbelievable, but this is one dystopian novel that will stay with me. And hey, it's set in Melbourne!