Mr Romanov's Garden in the Sky 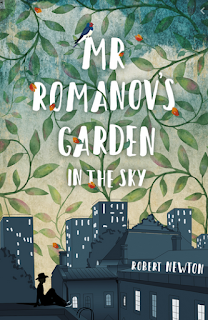 Isn't this a beautiful cover?

I chose Robert Newton's 2017 novel Mr Romanov's Garden in the Sky for the Convent Book Group, to fit with our November theme of Gardens. But it turns out that the book doesn't actually have much to do with gardening at all.

This is a terrific novel. But while I was reading it, I was haunted by the feeling which all writers know, which I'll call Authorial Serendipity. This happens when Author A (in this case, me) has a book coming out soon, and reads a book by Author B (in this instance, Robert Newton), which shares some of the characteristics of Author A's book... It's disconcerting, it happens all the time, and there's nothing you can do about it except grit your teeth and assure Author B that you have NOT plaigarised their work... it's just coincidence.

But. Mr Romanov's Garden is a fair bit darker than The January Stars. Lexie's dad is dead, her mum is a junkie, Mr Romanov has dementia, and the novel opens with someone throwing his dog off the top of the housing commissions. At this point, I confess, I almost abandoned the book. I'm glad I pushed on, but it was a hard hurdle to pass. I promise that there are NO dead dogs in The January Stars.

Also, The January Stars has a bit of magic in it. So I guess maybe they're not so similar after all.
Posted by A latte beckons at 3:19 PM