The Winter of Our Disconnect 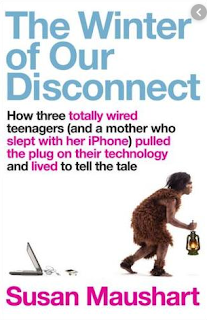 The subtitle (see above) says it all. About ten years ago, American-born, Perth-based academic Susan Maushart decided to give her family a temporary digital detox -- no screens for six months. No television, no computer games, no internet, no phones, no iPods. The Winter of Our Disconnect is their story, and a rumination on the effect that being permanently plugged in has on us all.

Times change fast in the world of technology. In 2009, being deprived of their iPods was a major hurdle. In 2019, I'm not sure that iPods even exist any more. Now music and podcasts are streamed through our phones. Maushart's kids didn't care that much about losing their phones, because back then phones didn't do as much as they do now. I laughed at the fact that Maushart's elder daughter, at 19, was addicted to Facebook. Ten years later, no 19 year old in their right mind would go anywhere near Facebook (so I'm told). Facebook is for nanas!

The details may have changed, but the central lessons are still valid, in fact more valid than ever. Boredom is good for us. Without a screen in the way, we can see the real world more clearly. Constant distraction is robbing us of deep concentration. Hanging out with our friends is more rewarding than social media. Access to screens stops us sleeping properly.

The three teenagers (heavily bribed to take part) survived. Maushart's son picked up his neglected saxophone and embarked on a musical career. Her daughter rebooted her disordered sleeping patterns and hugely improved her mood and her health. And Maushart, with more time to reflect deeply on her life, decided to relocate the family back to her home, the US. (How the kids reacted to this decision is not recorded.)

When I talked to my own teenagers about this experiment, their reaction was swift and predictable. No way. Impossible. And sadly, I fear they might be right. I don't think the digital world we live in now is all bad, but it does come at a cost, and I'm not sure our kids even realise what that price is.
Posted by A latte beckons at 10:50 AM