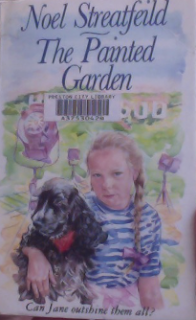 Re-reading The Secret Garden made me want to revisit this Noel Streatfeild book from 1949, in which an English family visit California and the 'difficult' middle child, Jane, finds herself cast as Mary in a film of The Secret Garden. There actually was a film version made by MGM in 1949 and it seems that Streatfeild did some research on set, though there is a note at the start of the book disclaiming any similarities.

Jane's family contains the usual array of Streatfeild characters. Rachel is the conscientious eldest daughter, a ballet dancer. Tim is the precocious youngest son, a gifted pianist. There is the usual non-parent helper attached to the family, in this case a school friend of the children's mother known bizarrely as Peaseblossom. Stroppy Jane is not talented at anything and wants to be a dog trainer, so she is charmed by the boy who plays Dickon.

The aspect of this book that always stayed with me was the clash between sunny America and post-war Britain. The children don't stay up for dinner with the adults but eat early supper of cereal and fruit on trays then go to bed at six thirty. The girls' clothes are humiliatingly shabby (Streatfeild is always aware of clothes). Transport is a problem as the children's aunt Cora, with whom they are staying, won't drive them all over town and public transport is non-existent, which is probably still true.

The best part is the reappearance of Posy and Pauline Fossil from Ballet Shoes. Pauline is now a film star and Posy is her same irrepressible self, dancing in movies but still part of the great Manoff's company. Posy befriends Rachel and Peaseblossom gets on well with Nana -- no wonder, because they are essentially the same character in different bodies.

In some ways Noel Streatfeild does write the same story over and over, but I enjoy the template so much that there is always something to relish in each variation. Comfort reading of the highest order!