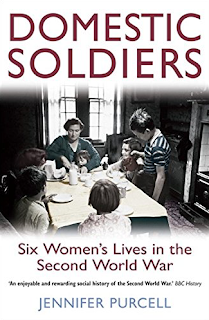 Mass-Observation was a British social research study which ran from the 1930s to 1961, when it was discontinued. About 500 volunteers kept diaries, replied to questionnaires, and recorded the opinions and behaviour of their fellow citizens. The archive formed by this mass of material is a treasure trove for historians.

Domestic Soldiers is loosely focused on the feelings, thoughts and experiences of six 'ordinary' women in wartime. Spread all over the country, their experience of war was hugely variable. One was a sheltered middle-class wife who grumbled at the inconvenience of rationing and incompetent servants; another suffered the full brunt of the Blitz. One sought emotional relief in flirting with service-men; another was painfully loyal to her repressed, controlling husband, but found a new lease of life and confidence in running a canteen and the local Red Cross shop.

Ultimately, I wanted more of the diaries and fewer general descriptions of what was going on in the war at the time. This is actually not a bad potted history of WWII, if that's what you're after, but the sheer amount of war reportage ended up squeezing out the women's words, which was a shame. One of this book's subjects, Nella Last, was a prolific MO correspondent and she has a couple of books of her own: Nella Last's War and Nella Last's Peace. I've read the latter and found it riveting. There were glimpses of Nella in Domestic Soldiers but I would have liked more.
Posted by A latte beckons at 1:06 PM