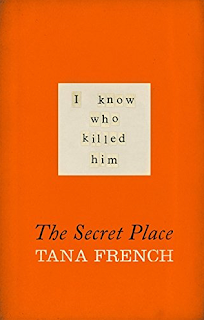 This was my first taste of Irish author Tana French's Dublin Murder Squad series. The Secret Place is set in a girls' private school attended by Holly, the daughter of Frank Mackey from the Murder Squad, both of whom feature in an earlier book, Faithful Place (which I'm reading now). Holly and her friends are sixteen, and a year ago St Kilda's (!!) was rocked by the murder of a student from their brother school. Now someone is claiming, via a postcard on a noticeboard, that they know who killed him.

The structure of this novel is really gripping. One strand follows the long year leading up to and following the murder, the ebb and flow of teenage politics, tight friendship with its shared dreams and dares, the intense love that can bind adolescent girls together. There is even an unexpected magical element to this part of the story which really surprised me, but in the context of the story I totally bought it, though I can imagine other readers balking.

The second strand tracks the single, highly pressured day that Holly brings the postcard to detective Stephen Moran, during which ambitious Moran and beleaguered Murder Squad member Antoinette Conway visit the school, interrogate students, and try to piece together the still-unsolved mystery. I don't think I've ever come across parallel narratives used this way before, and it's so simple but so masterly in ratcheting up the tension as both storylines converge.

I'm extremely impressed by Tana French. This is not just a murder mystery, but a layered and achingly evocative exploration of female friendship, beautifully underlined by the two detectives: Conway feels not just friendless but trapped in a hostile (male) work environment, while Moran is friendly with everyone but close to no-one. Both of them, from different angles, envy, admire and mistrust the girls' bond of loyalty.

The Secret Place is an outstanding novel. I'm now onto my fourth Tana French novel, and they are all terrific, but this is my favourite so far.
Posted by A latte beckons at 11:16 AM