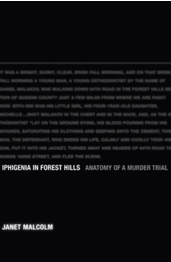 I'm an admirer of Janet Malcolm's writing, but I wasn't familiar with this slim book, which began as a New Yorker article. Iphigenia in Forest Hills follows a real life courtroom drama, the 2009 murder trial of Mazoltuv Borukhova, accused of hiring an assassin to murder her estranged husband. A member of the Bukharan Jewish community, Borukhova cut an exotic and mysterious figure in this murky case.

The Iphigenia of the title refers to the couple's young daughter. In Greek myth, Iphigenia was sacrificed to the gods by her father and avenged by her mother; in this case, it's alleged that Borukhova may have been sexually abused by her father, but despite this allegation, sole custody of the child was awarded to her father. If there was a motive for the murder, this was probably it.

I have to confess that I found Iphigenia in Forest Hills (a suburb of New York) as murky and baffling to read as the case seems to have been in real life. I gather that Malcom's point was to highlight the poor treatment of Borukhova by an unfeeling and dismissive justice system (don't get me started on the US legal system!), but at times I struggled to make out exactly what Malcolm was getting at. I think I may have been spoiled by Helen Garner's magnificent courtroom accounts, particularly This House of Grief, where Garner clearly sets out her own confusion (if she feels it) and often rage. There is no second guessing! In contrast, Janet Malcolm seems to tiptoe through her subject matter so discreetly that I couldn't figure out what she felt. Overall, I was quite disappointed in this book.
Posted by A latte beckons at 9:15 AM