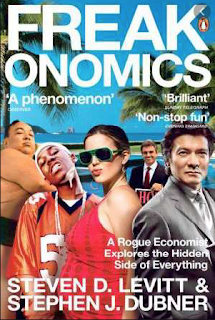 I studied Economics in Year 12. It was my worst subject and I have been sceptical of economists ever since -- what they say is either bleeding obvious or irrelevant to reality (in my opinion). But Freakonomics comes at economics from a different, and far more entertaining, angle. It's really about looking at data and asking questions -- not obvious questions, and not irrelevant ones, but questions that produce unexpected answers.

The most striking (and notorious) example of this approach concerns the youth crime wave predicted to swamp the US in the 1990s -- a crime wave that never eventuated. Commentators and politicians put this down to better policing, increased prison terms and a host of other causes, but Levitt (an economist) and Dubner (a journalist) have crunched the numbers and concluded that the real cause of this crime wave failing to occur was actually Roe v Wade -- the pro-choice legal decision which enabled many poor and desperate young women to have abortions. Twenty years later, a whole demographic of unwanted children had not been born and not grown up to become criminals. The crime rate fell.

This is probably the most controversial of their conclusions but the numbers do seem to stack up. There are also case studies involving parenting, names, real estate, crack dealers and many other topics. Since this book came out, Levitt and Dubner have produced several more and a successful podcast, but I think I've dipped my toe in deep enough for now.
Posted by A latte beckons at 1:40 PM