Rebel on a Rock 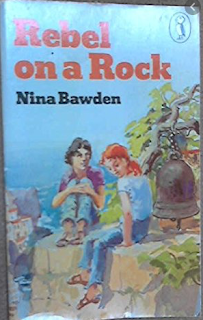 Not a very appealing cover -- a friend gave it to me, knowing that I collect old books, I probably wouldn't have picked it up otherwise, though I am a fan of Nina Bawden (author of Carrie's War and The Peppermint Pig). Thanks, Cathy!

Rebel on a Rock actually features a grown-up Carrie herself and her children, and is mostly told from the point of view of her daughter, Jo. The family, complete with new step-father Albert, have arrived on holiday in Ithaca. We're not told what country Ithaca is, because it's a dictatorship, but it's not too hard for the adult reader to guess the identity of this hot, sunny country with its honey and olives and goat's cheese, with a capital city called Zenith. (Greece was in fact a dictatorship in the 1970s, when this book was written and set, period of history about which I know absolutely nothing.)

I enjoyed Rebel on a Rock, it's an engaging story featuring Carrie's four children and the relationships they form with the townspeople of Polis. Because this is Nina Bawden, there is a lot going on, a subtle to-and-fro: Jo is torn between idolising her new step-father and suspecting he's a spy; soft-hearted young Alice befriends a policeman who is shunned by the rest of the population as an informer; their new friend Alexis is simultaneously irritating and brave. The story is mostly about not taking people at face value -- hardly anyone in the book is exactly who or what they seem at first.

Looking for an image for this post, I was surprised to find several different editions out there. I'd never come across Rebel on a Rock before. It's a shame it's such a naff title, not to mention this off-putting cover, but some of the others are better!
Posted by A latte beckons at 12:46 PM