From Secret Ballot to Democracy Sausage 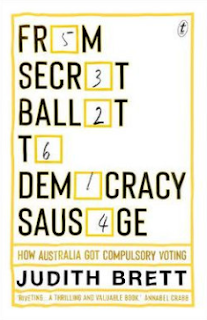 So long ago that it feels like a completely different life (I think it was some time in January) on a hot summer's night, I heard Judith Brett talking about this book, a history of the Australian electoral system, and I was so intrigued that I hopped out of bed at 1am and crept to my laptop to reserve it at the library then and there.

I was about eighth in the queue, but it finally arrived a couple of weeks ago -- also in another lifetime, in a different world. Now the libraries are all closed, re-opening who knows when, and I poked the book through the returns slot yesterday. I wonder when I will next be able to borrow a book -- all my lovely reserves are still waiting for me...

Judith Brett's firm contention is that Australia does elections better than just about anywhere in the world. We take our innovations for granted, but we should celebrate them, because a solid, impartial electoral system is one of the best safeguards for democracy. We didn't invent all of the following, but we did invent some, and others we adopted permanently.

There are lots of other elements, and not every aspect of Australian voting is a cause for celebration -- for example, the deliberate disenfranchisement of Aboriginal people (though we were early to give the vote to women). The emphasis on ease of voting is leading inexorably to a preference for early, postal and absentee voting before the actual election day (I don't approve of this). But in general, election days in Australia are genial, good-humoured community festivals, and that is in itself a cause for celebration.

From Secret Ballot to Democracy Sausage is a slim book but it's much more interesting than you might think!
Posted by A latte beckons at 2:48 PM