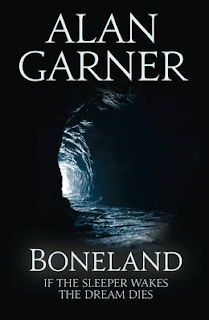 I have written about Boneland before. This time I was reading it primarily with an eye to its being a sequel to Weirdstone and Moon of Gomrath, and it succeeds surprisingly well, considering that it's an adult novel completing a trilogy initially aimed at 10-12 year olds.

Like all Garner's work, this is a multi-layered work. Without help, I would never have picked up the references to Camelot (the round table at Colin's workplace, his boss R.T. (Artie = Arthur) and colleagues Gwen and Owen), Gawain's quest, the medieval poem Pearl... And yet Boneland (only this morning I wondered if there is an intentional resemblance to homeland in the title?) contains magic, too. Who is the unconventional psychiatrist Meg (Morrigan/Margaret = Pearl?), and her offsiders Bert and Fay? If she is indeed the sinister Morrigan of the previous books, what are we to make of her helpful aspect here?

I keep forgetting to mention the other strand of the story, the ancient shaman who is guardian of the land, and whose role it seems Colin has inherited. His loneliness is almost unbearable, and it echoes Colin's own unbearable isolation. And yet the Watcher's story has a happy ending, of sorts.

It's been suggested that the whole of Boneland takes place in the last few moments of Colin's life, that its events occur inside the 'boneland' of his skull, a last frantic firing of the neutrons before death. But perhaps ultimately that is where all stories take place, in that mysterious territory between place and thought and dreaming.
Posted by A latte beckons at 11:55 AM