Part of the Furniture 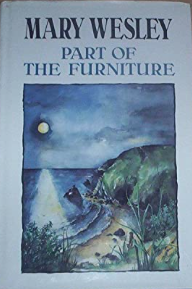 I've had a break from Mary Wesley for a while after a huge binge last year; I was starting to find her novels a little repetitive. But perhaps absence does make the heart grow fonder, or the brain less critical, because I very much enjoyed Part of the Furniture. I think I prefer Wesley's wartime novels to the contemporary stories -- the wild coincidences and twists of fate seem to make more sense in that topsy-turvy setting (not unlike the emergency in which we now find ourselves, come to think of it).

Seventeen year old Juno has just farewelled her childhood companions, Francis and Jonty, who are off to war, but when she's trapped in an air raid she takes shelter in the house of a stranger, Evelyn. But in the morning Evelyn has died, leaving Juno with a letter of introduction to his father in the country. (All this happens in the first chapter, so no spoilers.) With nowhere else to go, Juno takes refuge with Evelyn's father and embeds herself at the farm. But her last encounter with Francis and Jonty has consequences.

One thing I struggled with was that I didn't have a clear picture of Evelyn's age. He is described as having almost-white hair, and he is obviously ill and frail, which led me to imagine him as quite old - but then his father turns out to be only in his fifties! This confused me for ages (Robert married very young but I still had trouble with the maths). I love the way that Wesley plunges the reader into the action from the very first page. There are several familiar Wesley themes in this book: the upheaval of war, an idyllic country refuge, pregnancy and social disapproval, quite a lot of sex, an age disparity. Juno is appealing in her self-sufficiency and reserve, though at times she seemed a lot more mature than seventeen. The whole plot is terribly unlikely, but it was a romp that I was in the mood for.
Posted by A latte beckons at 11:53 AM