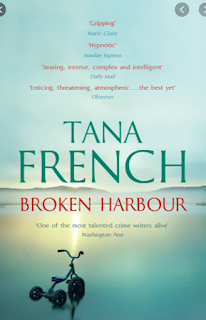 I was actually looking on my Kindle for Tana French's Into the Woods after watching Dublin Murders on SBS (and feeling quite frustrated by the ending, by the way) but then I saw that number 4 in the series, Broken Harbour, was available for a ridiculously low price, so I couldn't resist buying that instead.

I was very surprised to find that our narrator this time was Scorcher Kennedy, a character I had paid absolutely no attention to up till now -- an old school, unimaginative detective who sees the world in black and white. Despite his own troubled family history (mother suicided, sister has severe mental illness), he believes that basically you bring your fate on yourself -- murder victims, he tells us and his newbie partner Rick, are mostly asking for it. Hm... let's say we don't really warm to Scorcher.

At first glance, this horrible family murder scene looks like a bog standard domestic abuse situation. But Scorcher doesn't want to believe that dad Pat Spain, trying so hard to do everything right, could have been responsible. So he starts looking for other explanations.

Broken Harbour, set in the wake of the crash of the Irish boom, felt eerily apt. People suddenly out of work, struggling financially, the promise of prosperity betrayed. The Spain family, trapped in their house (from shame not quarantine, though), going slowly nuts... it all felt uncomfortably close to home.

One of the complications Scorcher and Rick discover is that Pat was obsessed with an animal he kept hearing in the roof -- a mink, a rat, a wolverine? He has set up monitors and traps, haunted internet chat rooms, stayed up all night on guard. I swear it is pure coincidence that it was this week that a possum has chosen to expire in MY roof! It took us several days to figure out that was where the hideous stench must be coming from... and now the possum guy has to open up the roof to extract it, but he can't do that until the rain clears... So we are stuck in lockdown with the delightful aroma of rotting brush tail. Ah, quarantine!
Posted by A latte beckons at 12:36 PM