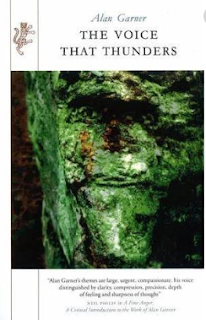 What a pleasure and a privilege to revisit this book of essays and speeches by Alan Garner. Not surprisingly, he returns repeatedly to the same themes from slightly different angles: the strength and centrality of myth and story-telling; his personal experience of being torn between his own place and people, and the world of the academy, and his long battle to reconcile those two aspects of himself; his harrowing experience of mental illness and eventual bipolar diagnosis.

Sometimes he is angry. There is a ferocious chapter on the deadening effect of studying books in schools (gulp) wherein he quotes some truly dreadful letters he's been sent by students and teachers. But he also shares some uplifting correspondence, particularly from young readers, and emphasises that this private communication, between writer and reader, is the whole point and purpose of his work.

Sometimes he is sad. His account of his battles with mental illness is difficult to read.

There are gems of insight scattered all through this book. What about this:

A more general aspect of English is that vowels may be seen to represent emotion and consonants to represent thought. We are able to communicate our feelings in speech without consonants, and to understand a written statement when the vowels are omitted. The head defines the heart, and together they make the word.


Garner writes movingly and illuminatingly about the background to his work -- the Welsh myths behind The Owl Service (next on my re-read list), and the story of William Buckley, which inspired Strandloper. Garner is a brilliant man, learned in languages, archaeology, geology, layers of history and legend, psychology and philosophy, and his fiction concentrates all this learning into rich, distilled story, which nourishes and repays repeated reading.

Alan Garner, as I've said before, is the writer I admire above all others. We are so fortunate to be able to glimpse inside his mind and share his hard-won wisdom in The Voice That Thunders.
Posted by A latte beckons at 11:06 AM