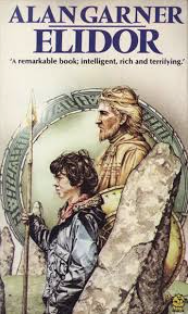 For my money, Elidor is where things really start to pick up. Alan Garner once observed that as his writing career progressed, his protagonists grew older, but always staying about the same distance from his own age. With Elidor, we move from children's literature to young adult, from high fantasy to what we would now label 'urban fantasy.'

The children (we are never told their ages, but they seem like young teens to me) enter the ruined land of Elidor through a portal in a derelict church. After a brief quest-and-test journey, they are sent back to our own world with four Treasures -- a sword, a spear, a cup and a stone (these reminded me of the four suits of the traditional tarot deck). But once in our world, the Treasures are disguised as a pair of nailed lathes, an iron rod, a cracked china bowl and a rock: the kind of imagined 'treasures' that any kid might pick up in a game of pretend. But the children are being pursued from the other side of the veil...

The section where the Treasures give off an electrical charge, causing household appliances to malfunction, is funny, and the part where intruders from Elidor rattle the door of the house is genuinely creepy. Garner's prose is beginning to be more carefully pruned in this book, and is much more powerful for its restraint.

The door of the children's house, which Roland conjures in Elidor, is the door of Garner's own childhood home, and the blasted landscape of Elidor is based on the 'ceiling world' he lost himself in as a sick child lying in bed. I think this is my favourite aspect of Elidor, the collision between real and imagined, created and remembered, mythic and quotidian, until the climactic scene with the unicorn rampaging in the demolished slums of Manchester. This is a very strong book.
Posted by A latte beckons at 10:56 AM