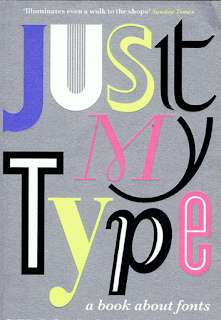 Judging from the huge number of different editions I found on the internet when looking for a cover image, I would guess that Simon Garfield's Just My Type has been wildly successful. It examines a ubiquitous but often overlooked aspect of modern life: the font.
Just My Type is an entertaining look at the history of printing and publishing, the development of different typefaces, and the careers of various font inventors. I must confess to being pretty font-blind myself, barely able to distinguish a serif from a sans serif and totally incapable of justifying a preference for one font over another (I generally write my rough drafts in a different font for each book, picking typefaces more or less randomly -- currently I'm working in Garamond, an earlier draft of the same manuscript is in Avenir, my last novel was submitted in Century Schoolbook).
That most reviled font, Comic Sans (which I'm ashamed to admit I frequently used for newsletters twenty years ago when I worked at Warner Music) was invented to accompany a 'friendly' software assistance package when the designer noticed that Times New Roman was too stiff and formal, and hardly deserves the hatred heaped upon it, though I groan like anyone else when I see it on the side of a van. I must say that reading this book has made me want to watch the documentary Helvetica, about a font which has apparently taken over the world (without me noticing).
I don't know if Just My Type will make me any more observant about fonts, but I'm going to try to pay more attention from now on.
Posted by A latte beckons at 2:17 PM