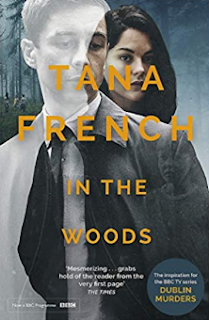 Regular readers of this blog will be aware that I have developed a huge writer-crush on Tana French and I have now read all of her books. Weirdly I seem to have saved her first book, In the Woods, until last, and I have already watched the TV adaptation, which combined this novel with the second in the Dublin Murder Squad series, The Likeness.
Even though In the Woods was published to huge acclaim and kickstarted French's highly successful career, for me it was the least satisfying and least accomplished of her novels. She has only got better as she's gone along. There are some themes here which French has returned to in later books -- the almost mystical bond of friendship, the power of memory and self-deception in the stories we tell ourselves, a touch of the supernatural.
Since it has been on TV and the book has been out for a long time, I don't think I'm spoiling too much to say that there is an element of the mystery in this story which is left frustratingly unresolved. The big twist of the novel also relies on the reader trusting a certain character, which I never did from the beginning. It's not that In the Woods is a bad book by any means -- it's still several cuts above your average murder mystery -- but I'm glad it wasn't my introduction to Tana French.
In the Woods came from the local library, which was briefly running a click and collect service for reservations. I'm guessing now that we are back under lockdown, that service will cease. It was good while it lasted!
Posted by A latte beckons at 10:35 AM