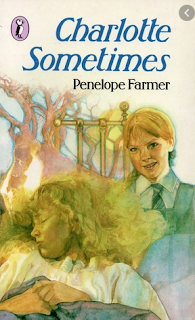 Charlotte Sometimes was a book that I admired as a young reader, but didn't return to very often - it was so eerie, so uncanny, that it disturbed me. With the benefit of age I admire it and enjoy it all the more. It is probably Penelope Farmer's best known work and inspired not one but two songs by The Cure ("Charlotte Sometimes" and "Splintered in her Head"; and also possibly the title of their next album, Disintegration?)
It was Penni Russon who enlightened me that Charlotte Sometimes is actually book three in a trilogy about Charlotte and her sister Emma, the first two being The Summer Birds and Emma in Winter. All three books share that dark, uncanny quality that makes Charlotte Sometimes such a haunting experience. (Thanks to Penni for lending them to me; I'm still on the hunt for copies of my own.)
In many ways this is a very bleak book. Set in boarding school, and later in grim lodgings, during winter, Charlotte swaps places with Clare in 1918. At first the girls change places every night, with no worse consequences than confusion over homework and bewilderment from Clare's sister; but then Charlotte finds herself in the wrong bed on the wrong night, with no way of getting home to her own time.
There are some genuinely terrifying moments: when Charlotte fears she's swapped places with Agnes, the spinster daughter in their lodgings, even further back in time; when she's spent so long impersonating Clare that she begins to forget that she was ever Charlotte; the excursion to the shadowy sick bay. It's almost a horror story, truly creepy. It's a story about the slipperiness of identity -- who is Charlotte, what makes her Charlotte apart from people seeing her that way? The theme of identity and twinship is one that Farmer, herself a twin, has returned to repeatedly.
I've just learned that my 1985 copy is different from the original. The ending was changed by the author  and some material was removed. So now I'll need to find myself a 1969 edition too, because that would have been the one that I first read.
Posted by A latte beckons at 11:27 AM