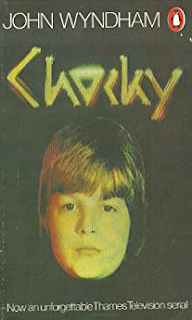 I read all of John Wyndham's books in high school, but haven't returned to them since. My memory of 1968's Chocky, his last published novel, was that it was very creepy, but I didn't find it frightening this time round at all. Perhaps my memory was clouded by the fact that I tried to write my own version of a Chocky story, which my mother read and worried that I'd developed schizophrenia!

Chocky is the story of 12 year old Matthew (narrated by his concerned father) who seems to have an invisible friend (always a fascination of mine); however 'Chocky' seems to have access to knowledge and abilities that Matthew himself doesn't possess. The family doctor is no help, a psych consultant brushes off their anxieties, Matthew's mother is in denial, but gradually his father becomes convinced that Chocky is real. But exactly who or what are they?

You read John Wyndham for the ideas and the plot rather than for character development, but I had forgotten how thin his characters are. I'd also forgotten the strand of casual misogyny that runs through this novel. Much like Nevil Shute's On the Beach, of similar vintage, women exist in this world purely as anxious mothers, whose 'irrational' fears need to be soothed by their calm, sensible husbands. Some prescient predictions by Chocky, though; if only we'd listened...