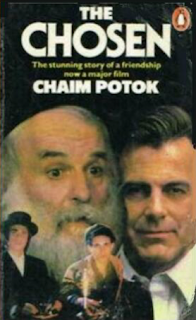 To my delight, I discovered my old copy of Chaim Potok's The Chosen on my book shelf, inscribed with my name and Year 12 class number. I don't think I'd picked it up since doing HSC many years ago. Looking for an image to include with this post, I came across a very recent article written by the director of the film version, celebrating the movie's 40th anniversary. Synchronicity! I've never seen the film, I hope I can find it somewhere.

Typically for Chaim Potok's novels, the story is slow-paced, but dense with detail and atmosphere. This was my first introduction to the world of Hasidic Judaism and on my first reading, much of Danny's world was a mystery to me -- the patriarchal community (women barely appear in the novel), the centrality of Torah, the almost mystical reverence for the rebbe, Danny's father. The book centres on the friendship between two boys: brilliant Hasidic Danny, destined to follow his father as leader of the community, but drawn to secular studies; and Reuven, observant but not extreme, who is ironically called to become a rabbi himself. The four way relationship between the two sons and the two fathers structures the novel.

The Chosen is set during and after the Second World War and it was odd to read of the death of President Roosevelt one day and the next day, see the same event portrayed on Band of Brothers (which my husband has been re-watching). It's really strange how often these threads of connection arise with my reading! I don't remember being struck by the almost complete absence of women in the book on first reading, even though I was at an all girls school, but it was glaring to me this time around. Now I want to revisit Potok's My Name Is Asher Lev, which I don't remember much about except that I found it moving, strange and intriguing.