The Giant Under the Snow 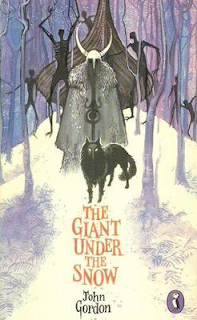 I learned about John Gordon and The Giant Under the Snow through a Facebook group about Alan Garner, and I'm amazed that I had never heard of this book or this author before, because it is very much my cup of tea. First published in 1968, The Giant Under the Snow follows three children who discover a huge mysterious figure in the woods, with an ageless guardian figure called Elizabeth Goodenough who watches over him. Soon the three friends, Bill, Arf and Jonk (short for Jonquil, which I adore!) are being pursued by a sinister warlord and a terrifying black dog, along with the creepy faceless 'leathermen.'

The Giant Under the Snow is light on plot (it's basically a chase story) but thick on atmosphere. Elizabeth gives the children small backpacks which enable them to fly, and the flying scenes are detailed and evocative, as the three learn to control their new gift and fly over the darkened snowy landscape by night. It reminded me of Penelope Farmer's The Summer Birds, published a few years earlier, and also Alan Garner's Elidor (1965), where the children also become guardians of precious relics. Giant and Elidor both feature the half-demolished streetscapes of slum clearances, a spooky setting for a world between myth and the everyday.

This book slots in very comfortably with other 1960s authors like Penelope Lively who were also exploring deep history and myth. Gordon also wrote The House on the Brink which also deals with an Arthurian figure, so I'm intrigued to track that one down, too.