A Natural History of Ghosts 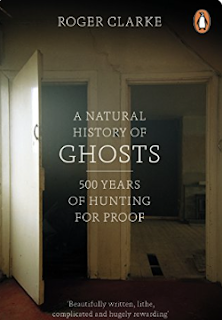 I heard Roger Clarke speaking on a podcast and immediately ordered his book, A Natural History of Ghosts: 500 Years of Hunting for Proof. It arrived just in time for Halloween -- perfect timing!

The back cover poses these questions: What explains spectral sightings? Why do we fear the supernatural? Why are some people or cultures more likely to experience hauntings than others? And what proof is there?

All fascinating and intriguing questions, which unfortunately Clarke doesn't explicitly address until the final chapter. The bulk of the book deals with historic cases of ghost sightings -- particularly stories which took on a life of their own (if you'll pardon the pun). So we learn about Hinton Ampner, a Tudor house that suffered from an eighteenth century haunting so severe that it became impossible for anyone to live there; the house was eventually demolished. There is the hysteria around the ghost of Cock Lane,  later proved to be a fraud; a cursed submarine of WWI, Victorian seances, fake clairvoyants and earnest investigations.

Clarke grew up in a haunted house and has devoted much of his life to trying to see a ghost; he examines the historical evidence with admirable objectivity, though he is clearly a believer. His attitude is that while fraud exists, it doesn't mean that ghosts don't also exist; even if a medium has indulged in fakery, that doesn't mean that they haven't also experienced genuine psychic phenomena.

I must admit I find this attitude a reasonable one. I've never seen a ghost either, and I probably wouldn't like it if I did, but my mother-in-law has seen one, and my daughter, as a small child, claimed to have seen an unexplained figure in our kitchen. The final chapter of A Natural History of Ghosts was the most satisfying for me, as Clarke traces the changing history of ghost sightings, from an ancient Roman tale of a ghostly apparition, wrapped in a white burial shroud and shaking chains from wrists and ankles (the absolute original cliche of a moaning phantom!), to monks and nuns dispossessed by Henry VIII's seizure of church property, through to modern era photos and spooky sound recordings (the YouTube series Unsolved Supernatural has some delicious examples of the latter).

I can't explain what ghost experiences might be, but I'm not game to insist that everyone who has seen or heard or felt a ghost is a liar. Maybe one day we will find out for sure.