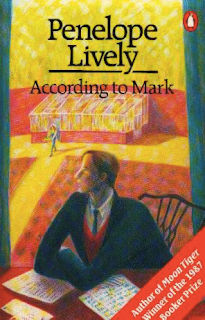 I really love Penelope Lively's books for children but I'm less keen on her adult fiction. According to Mark seemed like a pretty minor novel to me and I was surprised to learn that it was shortlisted for the 1984 Booker Prize (Lively won the Booker three years later with Moon Tiger). It reminded me strongly of A. S. Byatt's blockbuster Possession which appeared a few years later and tackled head-on topics that According to Mark brushes past more lightly -- the relationship between biographer and subject, the dance between biography, fiction and truth, the gaps in the record of a life, which might be deliberate or accidental.

According to Mark does deal with a literary mystery similar to the one central to Possession, but it's principally the story of the biographer Mark and his mid-life crisis infatuation with the grand-daughter of his subject. Carrie's reluctance to plunge into an affair -- she goes along with Mark out of politeness more than anything -- makes uncomfortable reading in a post-Me Too world, though it's played for comedy here. By three quarters of the way through I was becoming impatient for the revelation of the secret life of Gilbert Strong which Possession had conditioned me to expect, and its final arrival was a satisfying relief.

According to Mark is a pleasant, diverting novel but for my money, it doesn't compare to The Ghost of Thomas Kempe!