Life Lessons Football Can Teach Us, Part 3
Hang In There 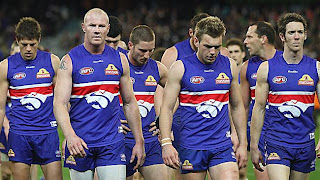 So things don't always go so well. Injuries strike your best players, or you realise with horror that over the space of a single summer, that vigorous and wily team member has suddenly become a doddering old man. The game plan that worked so well two years ago has become stale, and other teams are implementing it better than you. Is the beloved coach who brought you from the bottom of the ladder to within touching distance of the top now old-fashioned and ineffectual? The senior players are starting to slow down, but the kids are still too raw. Paradoxically, being so close for so long has taken its toll. Are the players tired? Have they stopped believing, after trying so hard for so long?

Administrations change. Coaches come and go. Games aren't played at the old ground any more. Legends retire. Your favourite player busts his knee. The words of the song are 'updated'; even the jumper gets tweaked and messed around with: horrible animals might appear, or bizarre swirls of colour. The very name of the team might change. Every season there are new faces and numbers to learn; the team doesn't stay the same for even two years in a row.

All that remains true is the love of the supporters for the club - that blind, unreasoning loyalty that keeps them faithful even after years of struggle and defeat.

Only the love endures.
Posted by A latte beckons at 10:48 AM