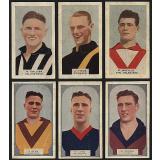 They have been calling Collingwood the greatest football team to have ever run onto a field. (1905)

The theory that drinking plenty of beer is good for a footballer's condition has been disputed. (1907)

St Kilda finally look like fulfilling the promise that internal conflict and lack of discipline have denied them for so long. (1913)

Boxing champ signs up with Footscray (1933)

The North Melbourne Football Club has been rescued from a grave peril by an interest-free loan of 500 pounds from the Victorian Football League. (1935)

The Geelong bubble has finally burst. After a record number of 23 wins in a row they finally succumbed to the former record holder, Collingwood. (1953)

And one I hope doesn't come true this Sunday (but I fear it will)...
The Hawks trounced a tired and bewildered Footscray today. (1961)

From 100 Years of Australian Football
Posted by A latte beckons at 4:27 PM