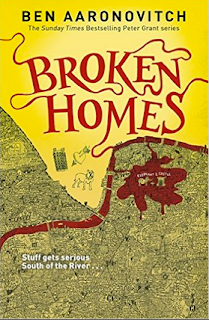 I wasn't expecting -- that.

I read Broken Homes* in less than a day, vacuuming up the story which this time revolves around architecture - apparently Peter Grant wanted to become an architect, or perhaps Ben Aaronovitch wanted to become an architect, because there has been quite a bit of information about London's buildings sprinkled through the previous volumes. I love architecture, despite knowing almost zilch about it, so I really enjoyed all that stuff. In this book, Peter and Lesley are closing in on the Faceless Man, a rogue wizard, who seems to be using a block of flats as a kind of magical engine.**

But the ending has left me gobsmacked... though it does make sense. I think.

Gotta go -- book 5 is waiting on my Kindle... Do I really have to cook dinner first? Just one chapter? Please?

* These titles are so clever, by the way.
** This idea appeals to me because I once used it in a book myself -- ie The Waterless Sea.