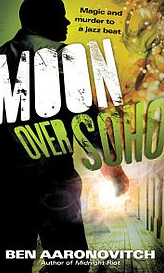 If Moon Over Soho wasn't part 2 of Rivers of London, there's no way I would have picked it up cold - what an unappealing cover! I much prefer the UK cover designs; this is the American version. And because it was the US edition (I may as well get all my gripes out of the way at once!), I also had to put up with US spellings throughout (favorite, gray etc) which I don't mind in a US book, but which grates horribly when I'm reading a book written and set in England. But my biggest annoyance was the fact that they changed Lesley's name to "Leslie" which is, conventionally, the male version of the name. I mean, why?? It's not like it's uncomprehensible spelled the other way! (I'm pleased to report that in vol 3, also an American edition, they have reverted to the right spelling. Which just makes the decision all the more bizarre...)

So... more adventures of Peter Grant, Thomas Nightingale, Molly, Dr Walid and the crew. This book is a fair bit raunchier than the first, which is important for the plot. It also centres on the jazz scene in Soho, and jazz doesn't really float my boat, but having said that, this is a satisfying follow-up. The action and the gore are exciting, but the parts of the series I really enjoy involve Peter's deepening knowledge of magic itself and the history of the practioners who have gone before (also important to the plot in this book), and, funnily enough, the mundane details of police work, the jargon and insider culture. I don't know if that stuff is all invented or if Ben Aaronovitch has an informant in the force, but it's very convincing.

These books have been coming out in rapid succession. Either Aaronovitch is an impressively swift writer, or he's been planning this series for a long time. Either way, kudos to him, it's a great achievement.