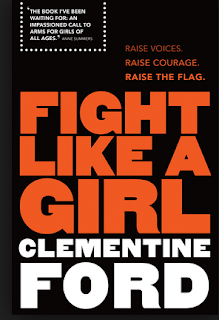 Clementine Ford is a welcome, in-your-face presence in mainstream media through her Daily Life articles and her lively Facebook and Twitter activity. Now Fight Like A Girl has collected her thoughts and observations on a variety of feminist issues in one volume. She's angry, and so she should be, and so should we all: at sexual violence, inequality, the silencing of women's stories, at the routine abuse of women, like Ford herself, who dare to speak up and speak out.

Ford quotes some of the obscene comments that her opinions have attracted. At first it's shocking, disgusting; you can't quite believe that there are men in the world who actually think this way and feel justified in saying it openly (albeit anonymously, behind the shield of a keyboard). But after a while, it becomes absurd and laughable. Come on, guys! Seriously? I agree with Ford that ridicule can be a powerful weapon, as effective as the Ridikulus charm against a Boggart.

Clementine Ford is unapologetically, entertainingly ranty, and the energy of her anger and her humour is bracing. At times I found myself wanting some slightly deeper analysis, and perhaps a clearer pathway for change. This is not academic feminism as I encountered it at university, and it's all the more accessible for that. I'll be lending this book to my fifteen year old daughter; it's a good place to start, but it's only the first step on the journey.
Posted by A latte beckons at 10:26 AM