The Voyage of QV66 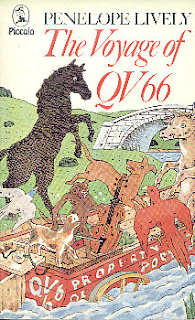 This is one of the books I picked up in Castlemaine. I was chuffed to add it to my collection of Penelope Lively's children's books, which are among my favourites. But I'm kicking myself that I didn't also buy A Stitch In Time, because I wasn't sure if I already had it -- does this ever happen to you? I lose track of which books I actually own and which books I just wish I owned. Anyway, I was pretty sure I had A Stitch In Time, but of course when I got home and checked, I didn't. Bugger. Then I would have had them all!

Published in 1978, The Voyage of QV66 is a funny little book, whereas A Stitch In Time is a classic Lively time-slip. The heroes of QV66 are a dog, a horse, a cow, a kitten, a pigeon and Stanley. At the beginning of the book, no one is quite sure what kind of animal Stanley is, and the book narrates their quest to find out. (Spoiler: you can see him on the front cover, so there's not much doubt in the reader's mind, at least, that he's a monkey.)

In a way, this is a kind of time-slip book; it's set in a vague future England where apocalyptic floods have necessitated the mass evacuation of humans (apparently to Mars!), leaving the Earth populated with animals and the detritus that People have left behind. And there is a weird episode at Stonehenge, which is very Penelope Lively, where some animals (crows, oh dear) seem to have slipped into a kind of barbaric pagan ritual. In fact there is a lot of oblique commentary on the foolish ways of humankind, as played out by the animals, including prejudice against those who are different, the exercise of power through violence and religious ritual, even pointless bureaucracy. Much of this would probably fly over the head of a child reader, but the animals' journey is eventful and amusing enough even without the social analysis. This would be a great read-aloud for a seven or eight year old, and would probably provoke lots of discussion -- like 101 Dalmatians did at our house.