Simple Gifts: Lesson in Living from a Shaker Village 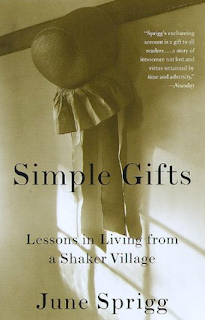 I didn't know much about the Shakers before I read this book. They were an American sect who made chairs? It turns out they were quite similar to the Quakers, but with some crucial differences: they lived in celibate, communal communities, and instead of silent worship, they celebrated God with dance and song. Not surprisingly for a celibate organisation, they've now all but died out -- I think there are four Shaker Brothers and Sisters left. But their legacy endures, in their beautifully crafted, clean-lined furniture, their art and music, and their intriguing history. They were one of the rare sects who truly believed in, and practised, equality of the sexes -- founded by a woman, and with two Brothers and two Sisters appointed to run their affairs. There's much that appeals about the Shaker way of life, and I'm not surprised that they were still attracting converts well into the twentieth century.

In this memoir, June Sprigg recalls the summer of 1972, when she was nineteen, working as a tour guide in one of the last Shaker villages, populated by a mere handful of old women. The young June forged a profound connection with these (mostly) wise, humorous and kind women, a connection that shaped the rest of her life (she went on to write several books about the Shakers, and worked in Shaker museums). She even contemplated staying on as a permanent member of the community, but decided that way was not for her.

It's not exactly a gripping narrative, but this quiet, contemplative book was not a bad way to finish off my reading year.