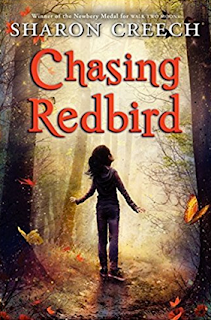 Borrowed from a friend, my first Sharon Creech, and a companion piece to the other books on wilderness I read (or half-read!) for the Convent book group.

Chasing Redbird has a lot more going on than the other titles, which focused primarily on the physical demands of wilderness survival and the daily fight for existence. Zinny is part of a large family, torn by grief, and her fight is to find her own place in a teeming mass of siblings. The trail she discovers and restores is the one place where she feels free to be herself, not smothered by her family. But she also has to deal with the recent loss of her aunt, the long-ago death of her almost-twin cousin, and the unwelcome attentions of hot boy Jake Boone, who has the unfortunate habit of stealing things and giving them to Zinny to attract her attention.

I did enjoy Chasing Redbird, and the wilderness sections were lovely. But I was quite troubled by the whole Jake sub-plot -- he is pretty stalkery at times, and there's one section where he grabs and kisses her against her will, which made me shudder. What made this more creepy is that he's sixteen and she's thirteen... It all works out in the end (of course), but I felt the story skated over the implications of his behaviour in a very carefree way which disturbed me (though I did enjoy Zinny's older sister insisting that Jake must really like her, and the thwarting of that expectation!) And the complications of the family situation, and the darting back and forth between timelines, initially confused me.