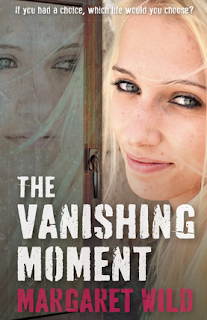 Borrowed from another friend. I know Margaret Wild mostly as a picture book author; The Vanishing Moment is the first YA novel of hers that I've read. Published in 2013, it's the story of two young women, Arrow and Marika, both struggling to deal with tragic events in their pasts -- in Marika's case, very recently. They both end up in the same small seaside town and strike up a tentative friendship. They also encounter a mysterious man who claims to have changed his life -- to have swapped it for a better one. Could Arrow and Marika do the same? Would they want to?

This book reminded me strongly of Margaret Mahy's magical novels, The Changeover and The Tricksters -- the endangered little brother, the coastal setting, questions of fate and free will, and young women at the centre. But instead of concentrating on the magical element, The Vanishing Moment takes its time setting up the initial scenario -- Arrow's emotional paralysis and her encounter with muggers, Marika's horrifying loss. The question of the Interchange doesn't even arise until the final quarter of the novel. After this, events swirl rapidly to a punchy conclusion.

I'm not enjoying much YA at the moment, but I did sprint through this and the last quarter of the book was a great reward for the slow start.