My father was a hoarder. A meticulous, neat, super-organised, OCD-type hoarder, but a hoarder nonetheless. (I say was, though he is very much still with us, because since he moved into aged care after a stroke a couple of years ago, his opportunities for hoarding have been drastically curtailed. Thank God, says my mother.)

The extent of Dad's hoarding was suspected, but never confirmed, until it came time to clear out my parents' house for rental. To give you some idea: Michael has been sorting through the two rooms that made up Dad's study; I have done the whole of the rest of the house. My job was far easier, I'm all finished! Michael is still going.

A hoarder Dad may have been, but he was never really much of a reader. As well as all the other things he collected (stamps, coins, business cards, matchbooks, train tickets, computer software, cameras, model aeroplanes...), he amassed a library, which contained many books he'd used in teaching -- texts on principles of flight, meteorology, aircraft magazines, cloud atlases -- as well as various other books that reflected his other interests -- travel guides, dictionaries, photography manuals, bird guides, street directories, histories of classical music.

It was fairly easy to decide about the other books, whether to keep them ourselves or pass them on, but the aircraft collection was more difficult. They were so specialised, so niche -- yet there were so many of them! Wasn't it better to try to keep them as a collection, for someone who might appreciate them?

And we found someone. A young woman associated with the flying school where Dad had taught for several years, someone who loves books (and also, coincidentally, is fascinated by PNG) and flying. She was dumbstruck when she first saw Dad's collection -- awesome and insane was what she finally stammered. She ended up loading her car with textbooks, maps, flight manuals, course materials, NOTAMs, notebooks and other treasures -- this was the back seat. The boot was full as well. Her poor little car was groaning, and dipping at the rear. 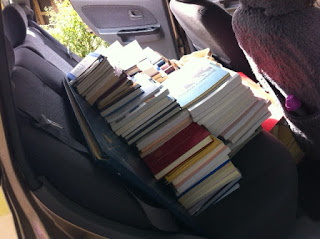 She spent a couple of hours exclaiming and exploring: we still use these sheets! Oh wow, this is from 1975! I've never seen anything like it...  Some things she'll keep and some she'll give away, but I feel reassured that this part of Dad's collection, at least, is in good hands.