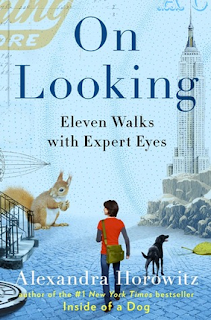 I bought On Looking from Brotherhood Books (yeah, yeah, I know...) but it wasn't until I began to read it that I realised I'd read a review or an extract from it a few years ago and tucked it away in the back of my mind.

Horowitz, a neuroscientist, has come up with a fantastic idea for a book, which appealed to me instantly: instead of repeating her familiar dull walk around the block with the dog (in New York City), she takes various 'experts' and others with her, to find out what they observe and she has missed. She walks with a blind person, a painter, a geologist, a specialist in fonts and graphics, her own toddler son and her dog, and records the different ways they experience and make new this familiar territory. She is shown bugs and signs of wildlife she's never noticed, hears sounds and smells odours that had escaped her attention.

I did enjoy this book, but ultimately it promised more than it delivered. Perhaps because On Looking was necessarily so rooted in a particular place, a place unfamiliar to me, it held less resonance than the same concept set in, oh, I don't know, the suburbs of Melbourne? The plants and architecture were unknown to me, the wildlife is different, the streets and traffic don't operate in quite the same way. Some chapters were more successful than others -- the geology one was frankly dull, despite Horowitz's best attempts to spice it up. On the other hand, the walk with the blind woman was absolutely fascinating, as was the chapter with the sound effects guy.

Overall, a mixed success, but more enjoyable than not.