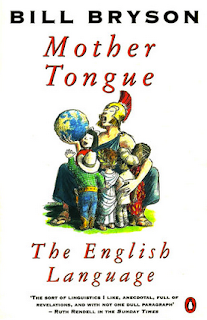 Evie has been on a bit of a language kick lately -- which means reading Wikipedia articles about slang and the origins of English. So I dug out Bill Bryson's Mother Tongue for her, thinking it might be of interest, and of course ended up reading it myself.

Published in 1992, I dare say the scholarship has advanced since it was written, as has technology: no internet or smartphones mentioned in this text! And the cover could do with reworking, in fact I think in later editions it has been. A Bill Bryson book is never less than supremely entertaining, though the facts are sometimes a little loose (Australians don't habitually drop the u in words like 'labor' - only when we're talking about political parties; and is an ice-crean tub in Victoria really known as a 'pixie'? Not in my lifetime!)

As a rapid, amusing sweep through the history of English and its rise as a global language, it's a fun ride and packed with fascinating snippets and anecdotes. But I would hesitate to rely on it as an authoritative academic source, despite the massive bibliography in the back.