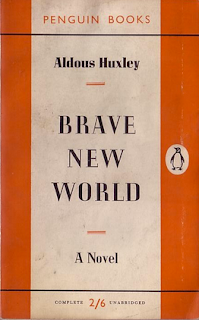 Long story short: in a burst of enthusiasm after receiving an NGV membership for her birthday, Alice signed up for an NGV book group session about Brave New World. She tried to read it, and listened to an audio dramatisation, but couldn't get into it, and with time running out, gave her ticket to me instead.

I first found this ancient paperback on my grandmother's bookshelf as a child of ten or eleven (I think it belonged to my mum). At the time I found it mystifying but compelling; I must have re-read it at high school (the inscription on the front page says I was in Year 11), but I have no memory of studying it.

The book group discussion was interesting (if Alice had gone, she would have been the youngest person there by about thirty years!) We all agreed that for a novel written eighty years ago, some elements were frighteningly prescient: the relentless consumerism, the constant distraction of shallow entertainment preventing deep thought, the lack of privacy and solitude. (My best line was 'FOMO is our soma.') Of course Huxley didn't foresee the internet, or seem to take into account the likely future automation of ... well, everything, apparently... but in the last part of the book it's explained that this was restricted deliberately, to give the population a necessary level of activity -- a precaution which our capitalist system seems unlikely to follow. Huxley's biggest 'miss' was the degree of social liberalisation that has occured since the 1930's -- BNW is sexually progressive, but horribly misogynist and racist.

Overall, we agreed it was a chilling and still highly relevant warning. It's terrifying how classic dystopian novels seem more relevant than ever at the moment -- Brave New World, 1984, The Handmaid's Tale. We may not be too close to a cloned, artificially stratified society, but many of Huxley's other predictions are uncomfortably near the bone.
Posted by A latte beckons at 3:24 PM