A Candle For St Jude 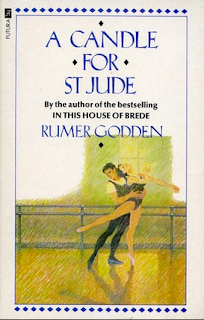 Rumer Godden wrote many, many books in her long life (thank heavens!) and it's almost reassuring to find one which is not quite a masterpiece. Which is not to say that A Candle For St Jude isn't a good book, or beautifully written -- it is both -- but just not quite at the level of Godden's very best work.

My edition of A Candle for St Jude says it came out in 1973, but apparently it was first published in 1948! Truthfully, it doesn't really matter, because the novel takes place in an enclosed world, over a mere 24 hours, in a London ballet school during the night and day before Madame Holbein's important anniversary concert, a celebration of her life's work. The first half of the book is rather melancholy and despairing, as it seems the concert is going to fail -- there is jealousy and regret, fear and anger. But in the second half, Madame has a last minute inspiration, and her crackling energy and determination come to life, infecting everyone around her. Now we get to see the love and passion and whirlwind fire that have made her so successful, and the book ends on a note of triumph after all. As always with Rumer Godden, her characters are drawn with delicate precision and depth.

READING NOTE: I have so many books hiding in my wardrobe that I've devised a random system to get through them all -- first I pulled out half a dozen with blue-ish covers, then a handful with reddish ones (scroll down and check if you don't believe me!) Now I've embarked on my yellow phase... I know colour-coding books is so last year, but I'm finding it surprisingly satisfying.