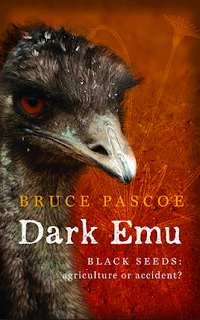 This remarkable book has won multiple awards, and deservedly so. It's been on my to-read list for a long time but I finally got around to reserving it at the library (thanks for the nudge, Judy!) and got my hands on it last week.

Bruce Pascoe's Dark Emu will be, I hope, just the first step in a thorough re-examination of pre-settlement Australian history. It's profoundly shocking to realise the extent to which we have been lied to, and remain in ignorance of, the sophistication of the Aboriginal nations before the European invasion. The evidence is there in the words of the white explorers themselves, but their testimony has been systematically ignored, to preserve the shameful myth that the Aborigines were primitive savages, wandering the country aimlessly, hunting and gathering when they got the chance.

The truth is very different. The First Australians maintained a highly developed land management system, involving periodic controlled use of fire. They built complex fish traps and netting, and far from squatting in simple 'humpies', many lived in villages with large stone and thatch dwellings. They stored large quantities of food and seed (plundered by whites). The idyllic grasslands observed by the first Europeans (ideal, so they thought, for grazing sheep and cattle) were no accident, but had been carefully created. And within a few years they were destroyed.

I became so angry reading this book. So much precious knowledge thrown away, an ancient heritage trashed. But Pascoe ends his book on an optimistic note. Perhaps the native species that sustained a continent for tens of thousands of years can be revived -- the yam daisy, native rice and others -- far better suited to Australian conditions than the imported rice and potatoes we insist on growing here. Perhaps we can learn from the sustainable practices of this country's first inhabitants just how to live in sync with the land, rather than fighting it.

But I have to say I'm not holding my breath.