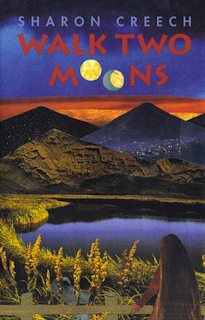 'Don't judge a man till you've walked two moons in his moccasins.' Sharon Creech's classic novel Walk Two Moons is all about judgments and preconceptions, about grief and memory and misunderstandings.

Salamanca Hiddle has lost her mother and her father has moved them to a new town. But when Sal begins to tell the story of her own new friend Phoebe (whose mother also disappears) to her grandparents, she begins to understand her own story better.

Creech's adept weaving of these three strands -- Phoebe's story, Sal and her parents' story, and the story of Sal and her grandparents as they take their cross-country trip -- builds a layered narrative which is never difficult to follow, and the ending is very moving.

I didn't love this book unreservedly; there were elements that made me uncomfortable, like the slightly stalkery relationship between Sal and Ben, and the part where their English teacher reads extracts from their private journals to the class. I was also annoyed that Creech uses a saying that I was planning to use in my own WIP -- about the birds of sadness/worry flying overhead but not nesting in your hair... Damn it!

But overall this is a beautiful little book with a deceptive depth of feeling and a sort of naive poetry.