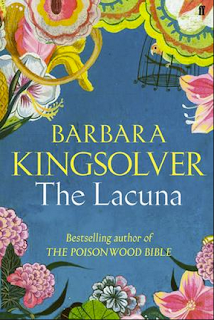 Just look at that beautiful cover. I think that's the reason I picked up The Lacuna at the library book sale, even though I knew nothing about the novel. I had read The Poisonwood Bible many years ago but couldn't remember much about it. So I put The Lacuna next to my bed, and there it stayed. I'm ashamed to say how long it loitered there before it went into hiding in the wardrobe... three years maybe? But finally it's seen the light of day, part of my 'yellow' quota. It counts as a 'yellow' book because its spine is the same colour as the frilly bits at the top of the cover. Apart from that I knew not one thing about it. It was a complete mystery.

I was about a hundred pages in before it dawned on me that Kingsolver was doing something very technically interesting -- she was writing a first person narration without using the word 'I.' And doing it very effectively, since it had taken me that long to notice!

Harrison Shepherd is a character who seeks to blend in, not stand out. But he finds himself in the centre of some riveting events -- shuttled between Mexico and the US due to his mixed parentage, never feeling entirely at home in either country, he becomes a plaster-mixer for Diego Rivera, no less, then a cook for the Rivera-Kahlo household, and eventually a cook and secretary for Leon Trotsky. I didn't know that Trotsky and Rivera knew each other, or that Trotsky and Kahlo had an affair! After Trotsky's murder (spoilers), Shepherd flees to the US and becomes a best-selling author, before getting tangled in the McCarthy-era Un-American Activities witch-hunts...

I wasn't sure if I was going to enjoy The Lacuna but by the end I was utterly absorbed, and now I want to know more about Rivera and Kahlo and Trotsky, and the Incas and Mexico (I already know enough about the McCarthy trials, thanks). And coincidentally, I was reading about Frida Kahlo just when Salma Hayek published her article about the making of Frida, which now of course I am desperate to see!