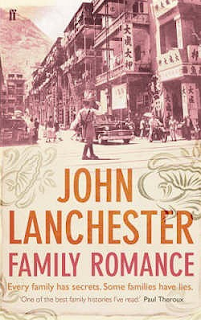 I scored this book in a book club lucky dip (thanks, Sian!), and what a great score it was.

It wasn't until after his parents' deaths that John Lanchester realised how little he knew about their lives. In the case of his mother, her name, her birthdate and her past were all lies. In this terrifically readable memoir-cum-family history, Lanchester examines the lives of his mother (born in Ireland, former nun and school principal in India, shaved a decade off her age in a breathtaking act of identity theft before marrying John's father, and lived with this secret all her life) and father (born in Hong Kong, grew up in Australia while his parents were interned in HK during the war, worked all around the world but still thought of the UK as 'home' despite never having lived there). I found many resonances with my own family history, especially the post-colonial upbringing and the yearning for a mythical 'home,' as well as some shrewd observations about the generational effects of alcoholism.

Perhaps the most moving section of the book (and the reason I've decided not to give it to my mother to read after all) is the final, shortest part, where Lanchester examines his own childhood and his ongoing battle with anxiety. Given his family history, parts of this story come as no surprise, but they are still difficult to read.

Family Romance is a fascinating personal history, a love story, a meditation on the nature of narrative, a history of the late colonial period and the Second World War, and much more. Highly recommended!