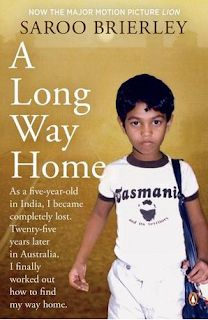 I went to see the movie Lion when it came out in 2016 and thoroughly enjoyed it, especially Dev Patel's performance (and his outstanding Australian accent!) So I was interested to read the autobiographical book by Saroo Brierley, A Long Way Home, on which the film was based.

It really is an extraordinary story. Aged 5, Saroo wound up on a train that carried him across India to the city of Kolkata. Unable to tell anyone where he'd come from, he survived on the streets for several weeks before entering an orphanage and very shortly being adopted by an Australian couple and taken to Tasmania to begin a new life. Though happy and grateful to his new family, he never forgot his old life and as a student, began a painstaking search on Google Earth for the town he'd left so many years before, with only a half-remembered name and some geographic markers for guidance.

It was startling to learn that Saroo had vastly underestimated how far he'd travelled to wind up in Kolkata; he was searching the wrong part of the country, and only by chance came across the tiny railway station with the landmarks he remembered. His account of how he managed to reconnect with his family (his mother had never moved, in case he did one day find his way home) and discovered the truth of what had happened that fateful day, is very moving.

Saroo had garbled the name of his neighbourhood, the name of the town he'd travelled from, and even, most startlingly, his own name -- his family knew him as Sheru. Reading A Long Way Home made me want to go back and re-watch Lion, which brought the lost little boy's experiences so vividly to life.