A Presumption of Death 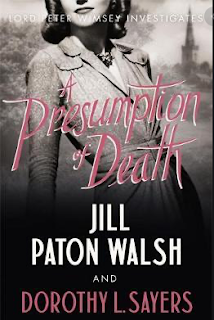 I enjoyed A Presumption of Death very much. I think was the first of Jill Paton Walsh's forays into Lord Peter Wimsey territory and it's excellent. Sensibly Paton Walsh realises that Harriet Vane is the better part of Wimsey-world, and for most of the book, Harriet is detecting alone at Talboys during the war while Peter is off doing mysterious Top Sekkrit spying stuff in Europe.

During the war, Dorothy Sayers wrote various magazine columns purporting to be letters between members of the Wimsey family, discussing their wartime activities; Paton Walsh has used this material as a canon source for their whereabouts and attitudes, which provides a solid foundation for the story. There is lots of well-researched detail about rationing, black market shenanigans, spy fears, evacuees and so on -- the one nit I would pick is that Peter refers openly to sending a coded message to Bletchley, at a time when Bletchley was super-secret and I doubt he would have mentioned it even to Harriet and Bunter (though Bunter no doubt knew all about it already -- hm, perhaps it is excusable? No secrets from Harriet, obviously!)

Elements of the central mystery were enjoyably guessable, and the relationship between Harriet and Peter is beautifully depicted. It's so nice to see them working together, very much in love but not sickeningly so; it's the rock solid partnership hinted at in Busman's Honeymoon, and thoroughly satisfying.