The Stones of Green Knowe 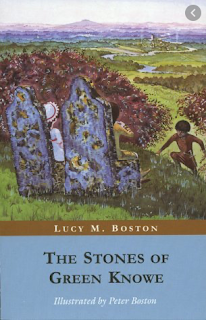 First published in 1976, too late to make it into the Mt Hagen library, The Stones of Green Knowe remained unknown to me until adulthood, and rounds off the series with a look forward rather than backward in time, as young Roger d'Aulneaux, in 1120, becomes the very first child to live in the brand new house that will become Green Knowe.

He discovers the two immeasurably ancient stones on the hilltop which will take him briefly forward (or once, terrifyingly, backward) in time, so he can see what will become of the new stone house of which he is so proud. He meets Linnet and Toby and Alexander, Susan and Jacob, and Tolly, and there is a lovely scene where all the children are able to gather together across time.

However, there is a melancholy undertone to this final book. Moving forward to Tolly's time, Roger is dismayed to notice the devastation of the wildlife -- so few birds and animals, hardly any insects, the wild profusion of plants disappeared. If it was this bad in 1976, one can only imagine how horrified Roger would be in 2021 (unless there has been some rewilding at Green Knowe). And the books ends on an abrupt, brutal note as the ancient stones are uprooted and carried away. It's not a comforting note to end on, rather like the catastrophic ending that The Last Battle provided for the Narnia books. And like The Last Battle, I think if I'd read The Stones as a child, I would have avoided re-reading it. But I do enjoy the glimpse of twelfth century life, seeing the first carving of St Christopher and the newfangled wall-fireplace, and Roger is a worthy ancestor.