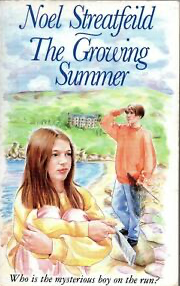 I found this copy of Noel Streatfeild's The Growing Summer in Savers in Footscray, where my big girl has moved. While she was hunting for novelty glasses and board games to furnish her new flat, I was scouring the book shelves.

The Growing Summer is dedicated to Elizabeth Enright, which is a lovely touch. Enright's books often centre on children exploring their environment and developing their independence, and this novel shares that flavour. The rather sheltered Gareth children are abruptly shipped off to their great aunt in Ireland (topically, their father is researching a 'microbe' that 'might start an epidemic' in the 'Far East' and then falls dangerously ill himself).

Great Aunt Dymphna is highly eccentric, lives in a near-ruin of a big old house and leaves the children very much to their own devices, expecting them to cook and clean and amuse themselves; which over the course of the summer, they gradually become capable of doing. There is an added complication in the form of a mystery runaway boy whom the children shelter, and while his presence provides the excuse for secrecy and drama, he is quite peripheral to the heart of the story which concerns the growing self-sufficiency of the family as they learn to cook, to fish, to do laundry and generally look after themselves.

Poetry-loving Great Aunt Dymphna introduces her nephews and nieces to the 'quotation game' where each player in turn recites a line of poetry, and the next player has to offer a quote where the first word starts with the same letter as the last word of the previous player's quote. Weirdly, I was simultaneously reading Jill Paton Walsh's A Presumption of Death, where Harriet and Peter play the same game!  It was the only time I've come across this somewhat esoteric pastime (and I doubt very much that any child of this generation would be capable of playing it -- with the help of Google, maybe!)