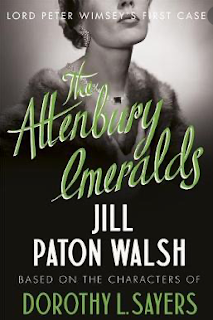 Having discovered Jill Paton Walsh, I've found myself stymied in my search for her children's books. But I did discover (I think I was vaguely aware of these before but steered clear because I didn't realise how good a writer Paton Walsh is) the three books Lord Peter Wimsey books she wrote, using the characters of Dorothy L Sayers. The Attenbury Emeralds is actually the last in the series, but it doesn't matter.

I suppose this counts as fan fiction, but it's definitely superior fan fiction. In some ways I preferred The Attenbury Emeralds to the later Wimsey novels, which to my mind became a bit arch -- all those bits in untranslated French! Harriet and Peter's love talk! But Paton Walsh takes a sensible, down to earth approach to Sayers' characters, keeping the best bits (Harriet's intelligence and compassion, Peter's wit and sensitivity) and ditching the embarrassing excesses. And if the mystery itself is a little lacking in Sayers' ingenuity, it's a bargain I'm happy to make.

The Attenbury Emeralds is divided into two parts. In the first, Peter and Bunter re-tell Wimsey's first case to Harriet (a wartime story, featuring the horrific bombing of the Cafe de Paris during the Blitz); in part two, highly coincidentally, the emeralds re-emerge in a continuation of the old mystery. The coincidence is awkward, but the setting is really well done -- after the war, when social norms have been upended and the lines between staff and employers are blurring. Bunter and his wife sometimes eat at the same table as the Wimseys, and their children are friends; the elite conventions of wealth and title are more burdensome than ever. It's the personal story of Harriet and Peter's adjustment to circumstance rather than the mystery itself which hooked me into this book. I can't wait for the next two.