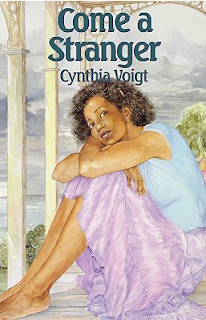 There are a couple of uncomfortable elements to Come A Stranger, the fifth book in Cynthia Voigt's Tillerman cycle. Firstly, it is the story of Mina Smiths, Dicey's African-American friend whose we've met in previous books; and Voigt is a white author. In the 1990s this would probably have been seen as a progressive story, but in these days of Own Voices it's a less easy read. Secondly, Mina develops a crush (though she, and interestingly her mother, too, describe it as true love) on a much older minister -- Tamer Shipp, who we met as a high school contemporary of Bullet Tillerman in The Runner). Luckily the relationship never edges into physical territory and by the end of the book has become no more than a fond memory. Still, for a while there the story seems to be heading into dangerous territory.

Mina is unusual in the Tillerman books in not being a loner; she is deeply embedded in an extensive, loving community of friends, family, church, dancing class and school. She only briefly pulls away from this supportive circle after attending an otherwise whites-only dance camp, from which she is painfully ejected in her second year after 'growing wrong.' As always in Voigt's novels, music is a source of joy, solace and connection, and by the end of the book Mina has turned away from dance (a solo activity) but kept up her involvement in the choir (a collective pursuit).

I really enjoyed Mina's story, and the different slant it provides on the other Tillerman characters. The meeting of Tamer Shipp and Bullet's mother, Gram, at the end, was particularly moving. But somehow the friendship between Mina and Dicey didn't quite take flight for me in this telling, it was hard to understand exactly why Mina would be drawn to Dicey. Though Dicey's courage and self-possession are shown to us, she still presents as being pretty hard work!

I'm not sure if Come A Stranger would be published today, and though I'm glad it exists, I'm also glad that there are more and more stories being told from within, rather than from outside non-white communities.